Popping in the ear is most often associated with flying or traveling through a tunnel, scenarios that cause a rapid change in height or air pressure. While unpleasant, we understand that popping occurs in these situations, and it quickly goes away, returning our ears to their normal state.

However, in some cases your ears may pop despite staying in a single space, which can be confusing. If you experience constant ear popping, there are a few conditions that can cause this symptom, and the best way to determine the cause and begin treatment is to meet with a doctor.

What Can Cause Ear Popping?

This is the most common cause of ear popping and can occur due to a variety of reasons. For example, when on an airplane during ascent and descent the altitude changes quickly, which can cause a pressure difference in the ear canal. Another typical instance of changes in air pressure is when going through a tunnel, which compresses the air.

In some cases, your ears may keep popping because of a buildup of earwax.

Earwax is a beneficial compound that lubricates the ear canal and protects it from infection. It forms from secretions of the glands of the outer ear canal. This places earwax in the part of the ear canal closest to the opening of the ear, making it possible for the earwax to move out of the ear naturally.

However, your earwax may get stuck in the ear canal and cause a blockage, a situation that most commonly occurs when someone pushes the earwax deeper into the ear using a cotton swab. In other cases, the ear produces more earwax than it needs, which can also cause a buildup.

In addition to a popping or crackling in the ear, those with earwax buildup may also have symptoms of:

The eustachian tubes connect the middle ear to the back of the throat and play a significant role in helping the ears drain fluid. These tubes also help to equalize pressure within the ear. Actions such as swallowing and yawning temporarily open the tubes, which helps to balance the pressure inside and outside the ear.

Some causes of obstructive eustachian tube dysfunction include:

In addition to ear popping, those with obstructive eustachian tube dysfunction may also have symptoms of pressure and/or pain in the ears (which may be relieved when the ear pops), muffled hearing, and a sense of fullness in the ears.

Many types of illness can cause congestion in the sinuses, but when this congestion affects the ear, popping can occur.

Some illnesses that cause ear congestion include:

These conditions can cause swelling, which can prevent the eustachian tubes from opening, leading to pressure difference between the inside and outside of the ear. Fluid can also collect in the middle ear, and between the pressure and fluid buildup, pain can occur.

In addition to a popping feeling in the ear, you may also experience:

Why Does My Ear Keep Popping?

Ear popping occurs when the pressure in the ear needs to equalize to keep the eardrum from expanding or contracting more than it usually does. In some cases, this pressure equalization occurs quickly, which causes the popping sensation.

If the ear goes through constant popping, it is because something environmental or physical is preventing the ear from balancing the pressure.

How To Stop Ear Popping?

For those who are experiencing clogged ears, it is important to gently pop the ears to avoid damaging the eardrum.

When your ears are clogged, try:

Since many cases of ear popping result from the ear canal being clogged by earwax, removing the earwax can help relieve popping. However, it is crucial not to use a cotton swab to remove earwax as this method can instead push earwax further into the ear canal, increasing the probability of the ear canal becoming clogged.

In some cases, at-home remedies offer only temporary relief from ear popping, but clinical treatments are needed to provide a long-term solution.

One such treatment is a tympanostomy tube, or ear tube, which can help those suffering from obstructive eustachian tube dysfunction.

Those who have ear congestion due to an infection may benefit from antibiotics to clear the infection and the cause of the pressure buildup.

Should I Be Worried About My Ears Popping?

In most cases, there is no need to worry about popping of the ears, and the ears naturally will pop on their own to relieve any pressure buildup.

If you consistently suffer from ear popping or ear congestion, though, this may be a sign of a problem with the eustachian tube and may require a visit with a doctor.

If you feel the need to pop your ears, it is best to accomplish this by yawning, swallowing, or chewing. Forcibly popping the ears by plugging the nose and blowing out may cause damage to the eardrum, so it is best to pop the ear gently. For those whose ear pops when going throughout their day, it is likely through these gentle actions.

My Ear Keeps Popping and It Hurts

If your ear continues to pop and also hurts, the eustachian tubes are likely clogged.

When fluid or negative pressure gets stuck in the middle ear, the pressure outside the ear becomes too high, a situation which can cause ear pain. If the ear is continuing to pop and is accompanied by pain, you likely have a problem with the eustachian tubes or an illness causing swelling and affecting the eustachian tubes’ ability to open, such as allergies or an ear infection.

When To See a Doctor?

A doctor should check ear popping that is accompanied by any of the following symptoms:

Get Help from An Online Doctor

An online doctor is a convenient resource for those who quickly want to determine what is causing their ear popping. With the DrHouse app, you can meet with a doctor within 15 minutes, allowing you to quickly discuss what might be affecting your ears and begin treatment. All doctors you meet using the DrHouse app can also prescribe medication as needed to treat ears that keep popping.

Ear popping is a sensation that occurs when the ear quickly equalizes this pressure difference. It is most commonly experienced when on an airplane or going through a tunnel, although it can also affect those who are sick.

There are home remedies to help relieve ear popping, such as over-the-counter products and earwax removal, but some individuals may need to visit a doctor for a more permanent solution. Meeting with an online doctor is a great way to discuss treatments for ear popping.

DrHouse articles are written by MDs, NPs, nutritionists and other healthcare professionals. The contents of the DrHouse site are for informational purposes only and are not a substitute for professional medical advice, diagnosis, or treatment. If you are experiencing high fever (>103F/39.4C), shortness of breath, difficulty breathing, chest pain, heart palpitations, abnormal bruising, abnormal bleeding, extreme fatigue, dizziness, new weakness or paralysis, difficulty with speech, confusion, extreme pain in any body part, or inability to remain hydrated or keep down fluids or feel you may have any other life-threatening condition, please go to the emergency department or call 911 immediately.

Does Cranberry Juice Help You Poop?

Butterfly Stitches: What Are They and How to Use Them?

Can A UTI Cause A Rash Or Hives?

Baking Soda Bath for UTI – Does It Really Help?

Apple Cider Vinegar For Allergies: Does It Really Work?

Can Allergies Cause Migraines?

Does Cranberry Juice Help You Poop?

Butterfly Stitches: What Are They and How to Use Them?

Can A UTI Cause A Rash Or Hives?

Baking Soda Bath for UTI – Does It Really Help?

Apple Cider Vinegar For Allergies: Does It Really Work?

Can Allergies Cause Migraines?

Start an Online Visit
Visits are only $19 with membership! Available in NY.

Prescriptions as needed
Renew or get a new Rx.

Get Started
Visits are only $19 with membership! Available in NY 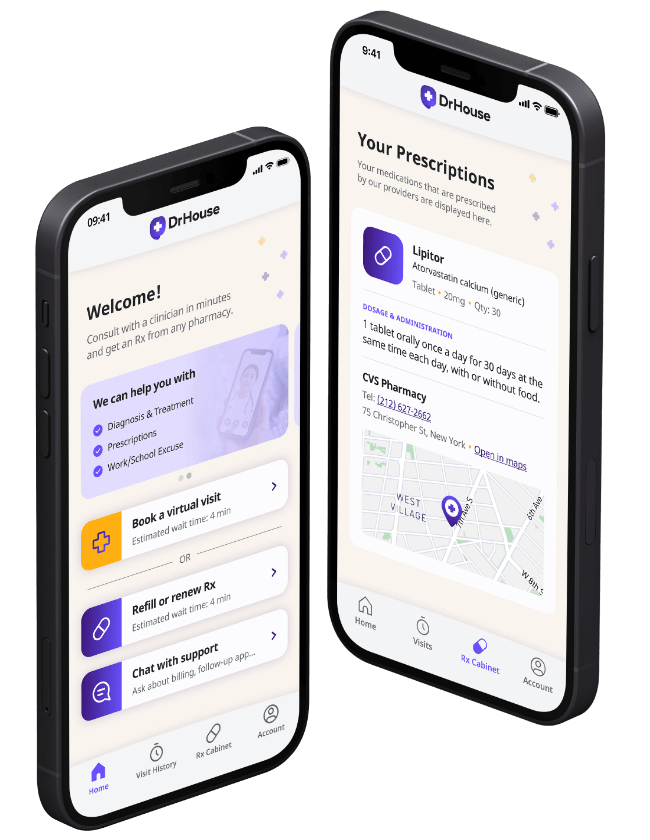 Enter your mobile phone number OR scan the QR-Code to download DrHouse app.

PHONE NUMBER
Get App
Visits are only $19 with membership! Available in NY.
QR-CODE

Your message has been sent

Close
We use cookies to enhance your experience, for analytics and to show you our offers tailored to your interests on our site and third party sites.
Privacy PolicyAccept
Manage consent

This website uses cookies to improve your experience while you navigate through the website. Out of these, the cookies that are categorized as necessary are stored on your browser as they are essential for the working of basic functionalities of the website. We also use third-party cookies that help us analyze and understand how you use this website. These cookies will be stored in your browser only with your consent. You also have the option to opt-out of these cookies. But opting out of some of these cookies may affect your browsing experience.
Necessary Always Enabled
Necessary cookies are absolutely essential for the website to function properly. These cookies ensure basic functionalities and security features of the website, anonymously.
Functional
Functional cookies help to perform certain functionalities like sharing the content of the website on social media platforms, collect feedbacks, and other third-party features.
Performance
Performance cookies are used to understand and analyze the key performance indexes of the website which helps in delivering a better user experience for the visitors.
Analytics
Analytical cookies are used to understand how visitors interact with the website. These cookies help provide information on metrics the number of visitors, bounce rate, traffic source, etc.
Advertisement
Advertisement cookies are used to provide visitors with relevant ads and marketing campaigns. These cookies track visitors across websites and collect information to provide customized ads.
Others
Other uncategorized cookies are those that are being analyzed and have not been classified into a category as yet.
SAVE & ACCEPT